A Look At My TV Antennas

There are three masts with several antennas on our roof. 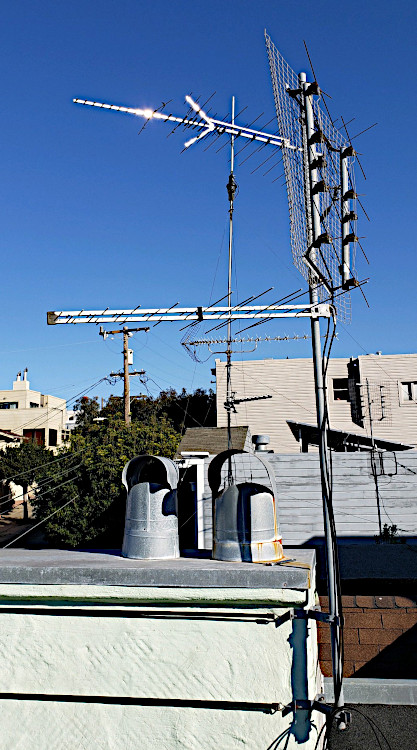 This photo shows the main mast with three of the antennas. 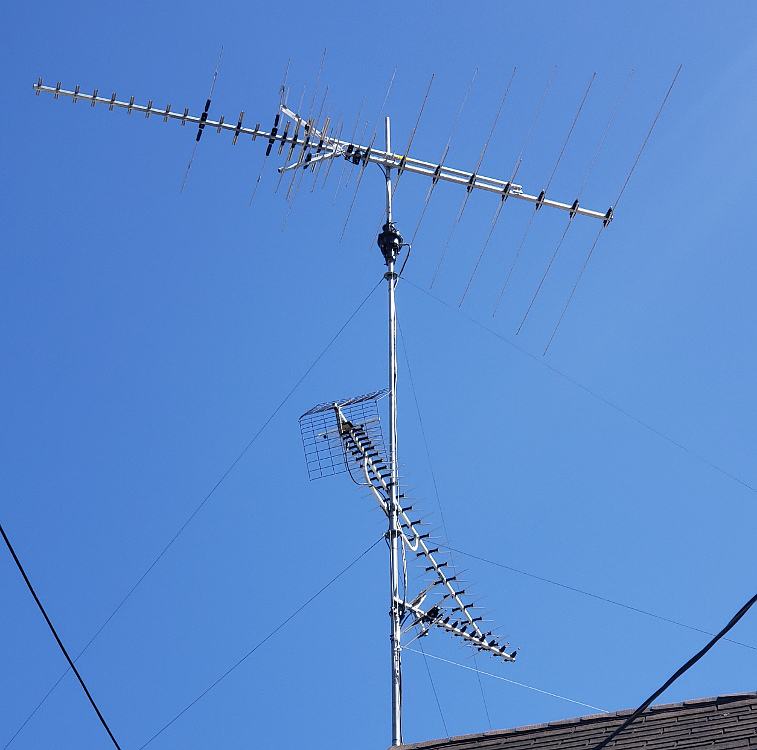 The antenna at the very top is the Winegard HD8200U all band antenna.  The rotor
is a Yaesu G-450A that has a rotation range of 450 degrees and is able to withstand
the very blustery winds here in San Francisco.  Below the rotor are the Antennas
Direct XG91 UHF antenna and the Antennas Direct SR-15 UHF antenna.

The second mast is at the back of the house and has a UHF Channel Master
4228 combined with an Antennas Direct Clearstream 5 for high VHF.
Mounted nearby is a Dish 1000.2 antenna for satellite TV reception. 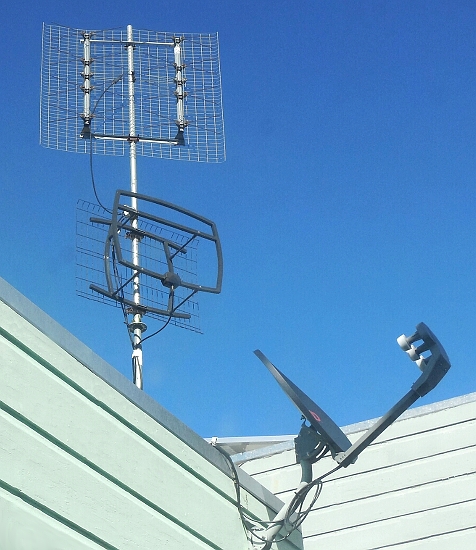 The third mast is mounted to the chimney and has two antennas, another UHF
Channel Master 4228 and, below it, the Ability LP345F Log Periodic antenna. 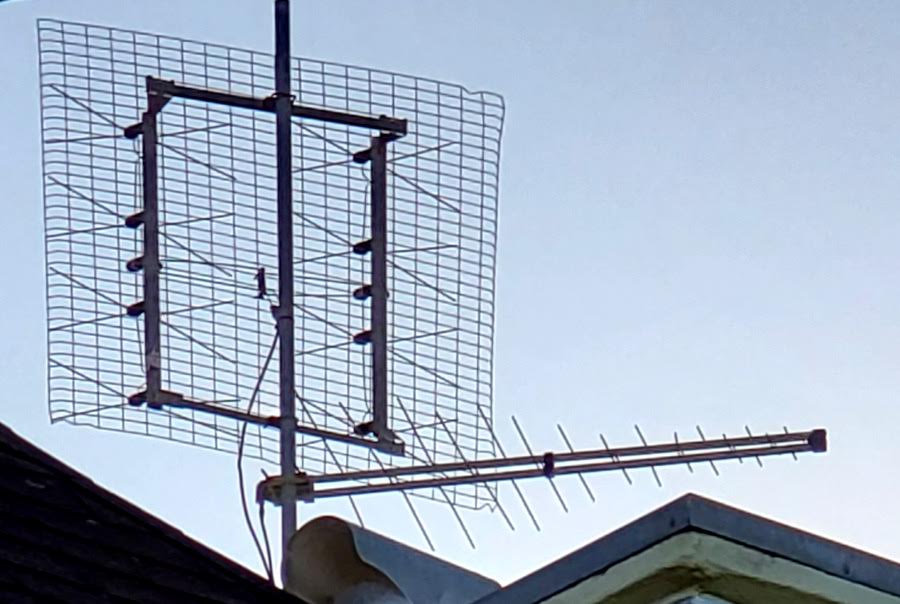 I also receive some of the VHF and UHF stations from Sacramento and Stockton transmitting
from the Walnut Grove site, 62 miles to the northeast on the opposite side of the 1000 foot
high East Bay hills. They can be very strong or non-existant depending on band conditions.

When atmospheric conditions have been right, the HD8200U has pulled in three distant
stations.  I've received two from the northeast, KCVU 20 at 157 miles near Paradise, and
KNCN 24 at 175 miles transmitting from the hills east of Red Bluff.  The third station is
KSBY 6 from Santa Barbara, transmitting on channel 15 from 193 miles to the Southeast.
We don't have the conditions here that permit very long distance skip, like they regularly
have back in the eastern U.S., so 193 miles is the furthest distance that I've received.

The Antennas Direct XG91 antenna is locked in at 190 degrees and is excellent for
receiving the three VHF stations transmitting from Sutro Tower and Mt. San Bruno
and all of the UHF stations transmitting from Sutro Tower, Mt San Bruno, and the
South Bay locations.  We have it connected to the over the air receiver of our Dish
Hopper DVR and use it for recording programs from the over the air channels.
With it locked in one direction we don't worry about missing any recordings.

The small Antennas Direct SR-15 UHF antenna mounted at the bottom of the main mast, and
shown below, is pointed at 200 degrees and used as a back up to the XG91.  It also receives
the stations from Sutro Tower and Mt. San Bruno and some of the South Bay stations. 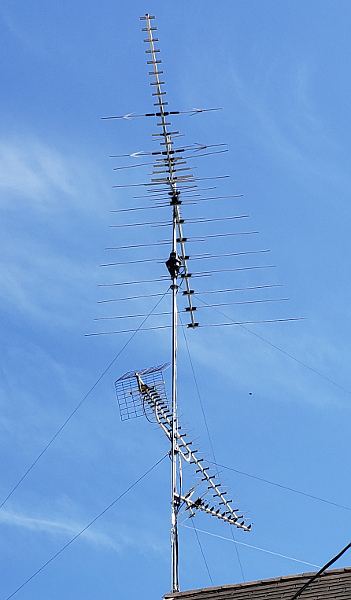 WHY SO MANY ANTENNAS?

Why do I need all of these antennas?  I don't need them, but they're fun to have for experimenting
and testing. Also, the CM4228 and Clearstream 5 combination (pictured below) are used for my TV in
the bedroom.  While the these antennas don't receive the distant stations, they do receive the stations
transmitting from Sutro Tower, Mount San Bruno, and many of the stations in the North and South Bay. 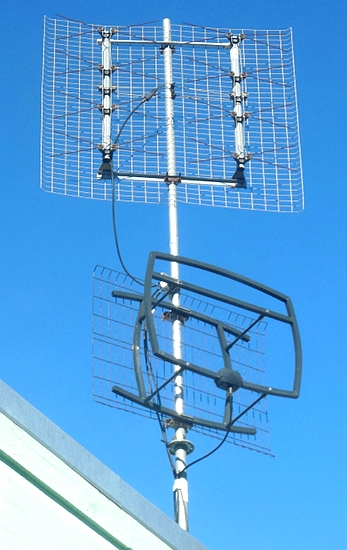 The CM4228 mounted on the chimney is used to receive the stations from Sutro
Tower and Mt. San Bruno, plus the four UHF stations from the South Bay. While
it's designed as a UHF antenna, it receives all of the VHF channels on 5, 7, 12 and 13.

The LP345, the all channel log periodic antenna, shown below the CM4228, is pointed
north at 350 degrees for receiving the low VHF and the UHF stations in Marin and
Sonoma Counties.  It doesn't work nearly as well as the the larger 8200U, of course,
but is a good back up for the stations to the north.  It also receives the stations from
Sutro Tower and Mount San Bruno, and occasionally those from the South Bay, off
the side and back of the antenna.

This ia another shot of the LP345 from when it was mounted on a different mast. 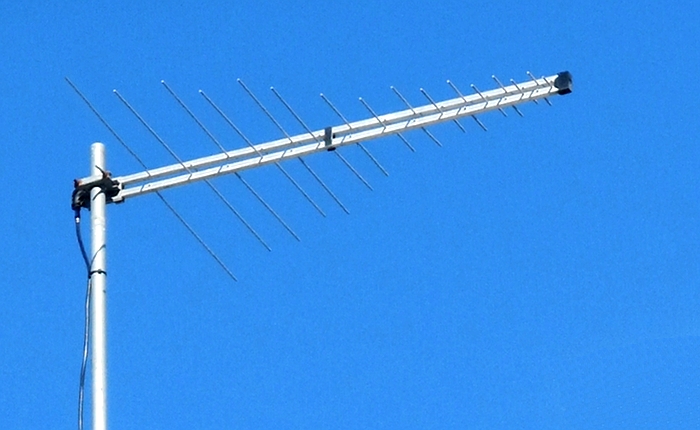 Most of these antennas are connected to individual distribution amplifiers, then the signals
are fed to switches allowing any one of the antennas to be selected with the simple push
of a button for our three TVs and my HD Home Run and converter box receivers.